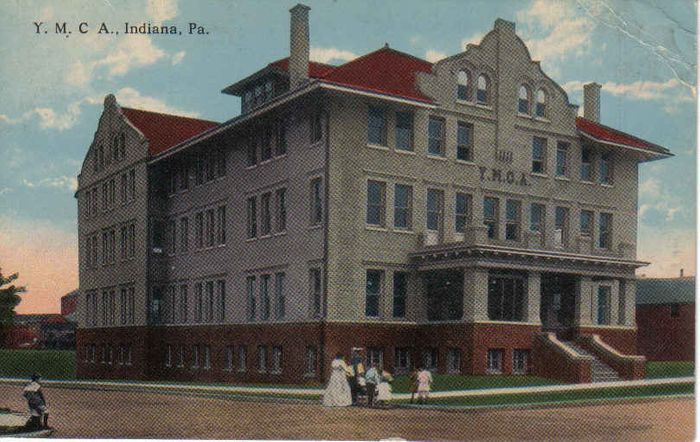 Often, when people think of a library, they think of a “place that has books.” From the very beginning, the history of the Indiana Free Library has been a history of change in both its physical place and in the services it provides. Throughout all those changes, the central mission of the Indiana Free Library has always been focused on serving and strengthening the community.

1901 - A women's civic organization forms (originally known as the Fortnightly Current Events Club) with a group of 25 women with a high literacy interest and a desire to improve the community of Indiana. This civic group soon expanded in size and became known as the New Century Club (NCC).

1907 - On May 14, the NCC establishes a Reading Room above Graff's Market at 27 North 6th Street in Indiana. This room consists of one bookshelf made of packing boxes from the H.C. Christy Shoe Store. The first book was donated by a member of the Normal School (now IUP) faculty. More books, magazines, and newspapers were soon added and could be read without charge in the Reading Room. Miss Sally Howard was the first librarian.

1910 - The Reading Room needs more space, and on September 19, moves ita 500 books across the street to the Wissel building at 44 North 6th Street, (The site is occupied today by the Delaney car dealership.) On February 13, the NCC sponsors a book social to acquaint the community with the idea of establishing a lending library.

1911 - On April 5, the Reading Room becomes the Free Circulating Library. Books may be borrowed for a two-week period; late fines are 2 cents a day. At this point, the library becomes known as the Free Library of Indiana or the Indiana Free Library. The NCC is the library's primary support is and continues to be until

1914 when the school district begins to give support to the library (later discontinued).

1930 - The Indiana Free Library moves into four rooms in the McCartney Homestead at the SE corner of North 8th and Water Streets in Indiana, Indiana Borough begins to fund the library. The collection has expanded to 5,000 volumes.

1934 - The Indiana Free Library moves to the Community Center that continues to be its home. The Community Building had been given over to the Indiana Borough when the YMCA was no longer able to operate it, under the condition that it be used for community groups. The library originally occupies only a portion of the first floor and later the entire first floor.

1972 - White Township begins to contribute financial support to the library.

1978 - The first floor of the Community Center is renovated with a grant of $300,000 for furniture and building improvements.

1989 - The Indiana School District recommits funding to the library. These funds entitle every resident of Indiana Borough, White Township, Armstrong Township, and Shelocta Borough the opportunity to secure a free membership card for access to all facilities and services.

1991-1993 - The library is expanded from 5,800 to 15,000 sq.ft. at a cost of $475,000 ($179,000 obtained through a Library Services & Construction Grant and the remainder donated through private businesses and individuals). This campaign allows IFL to redesign the basement where the Children's Library is moved, establish the Community Room on the second floor, install an elevator, and establish an Endowment Fund for the library.

1998 - Through a $500,000 HUD Grant , obtained with the assistance of Congressman Murtha, IFL renovates the second floor; replaces the entire electrical system in order to support computing facilities; replaces the lighting, ceilings, and carpet; paints all three floors and constructs an internal staircase from the basement to the second floor.

2008 - A $45,000 Department of Commerce & Economic Grant, facilitated by Senator Don White, improves handicapped accessibility to the building's entrances and provides security for the collection and the building through the installation of security gates.

2009 - Patron computers are upgraded through a grant from the Bill and Melinda Gates Foundation. WiFi equipment is installed in the library through the generosity of a local merchant.

2015 – A $500,000 grant, received with the help of Senator Don White and Representative Dave Reed, is used to renovate all of the restrooms in the Community Center. All restrooms and the doorways to the Community Room are made ADA-compliant.

2018-2019 – A multi-million dollar renovation of the Community Center Building is made possible by grants from the Keystone Grant for Public Library Facilities program and Redevelopment Assistance Capital Program. The exterior of the Community Center Building (roof, windows, bricks) was rehabilitated. Interior renovations were also completed including an overhaul of the HVAC system, a complete overhaul of the Children’s Library (including the creation of a new story room), and the creation of a technology/maker-space facility in the former Book Sale room.

Today, the Indiana Free Library has approximately 75,000 holdings and serves 32,924 patrons. The library currently offers children and adult programming on a regular basis and also offers free public access to computers and the Internet.