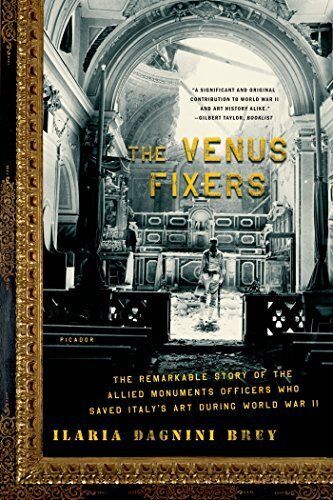 In 1943, while the world was convulsed by war, a few visionaries -- in the private sector and in the military -- committed to protect Europe's cultural heritage from the indiscriminate ravages of World War II. In the midst of the conflict, the Allied Forces appointed the monuments officers―a motley group of art historians, curators, architects, and artists―to ensure that the great masterworks of European art and architecture were not looted or bombed into oblivion. The journalist Ilaria Dagnini Brey focuses her spellbinding account on the monuments officers of Italy, quickly dubbed "the Venus Fixers" by bemused troops.

Working on the front lines in conditions of great deprivation and danger, these unlikely soldiers stripped the great galleries of their incomparable holdings and sent them into safety by any means they could. They worked with skeptical army strategists to make sure air raids didn't take out the heart of an ancient city, and patched up Renaissance palazzi and ancient churches whose lead roofs were sometimes melted away by the savagery of the attacks. Sometimes they failed. But to an astonishing degree, they succeeded, and anyone who marvels at Italy's artistic riches today is witnessing their handiwork.

In the course of her research, Brey gained unprecedented access to private archives and primary sources, and the result is a book at once thorough and grandly entertaining―a revelatory take on a little-known chapter of World War II history. The Venus Fixers is an adventure story with the gorgeous tints of a Botticelli landscape as its backdrop.